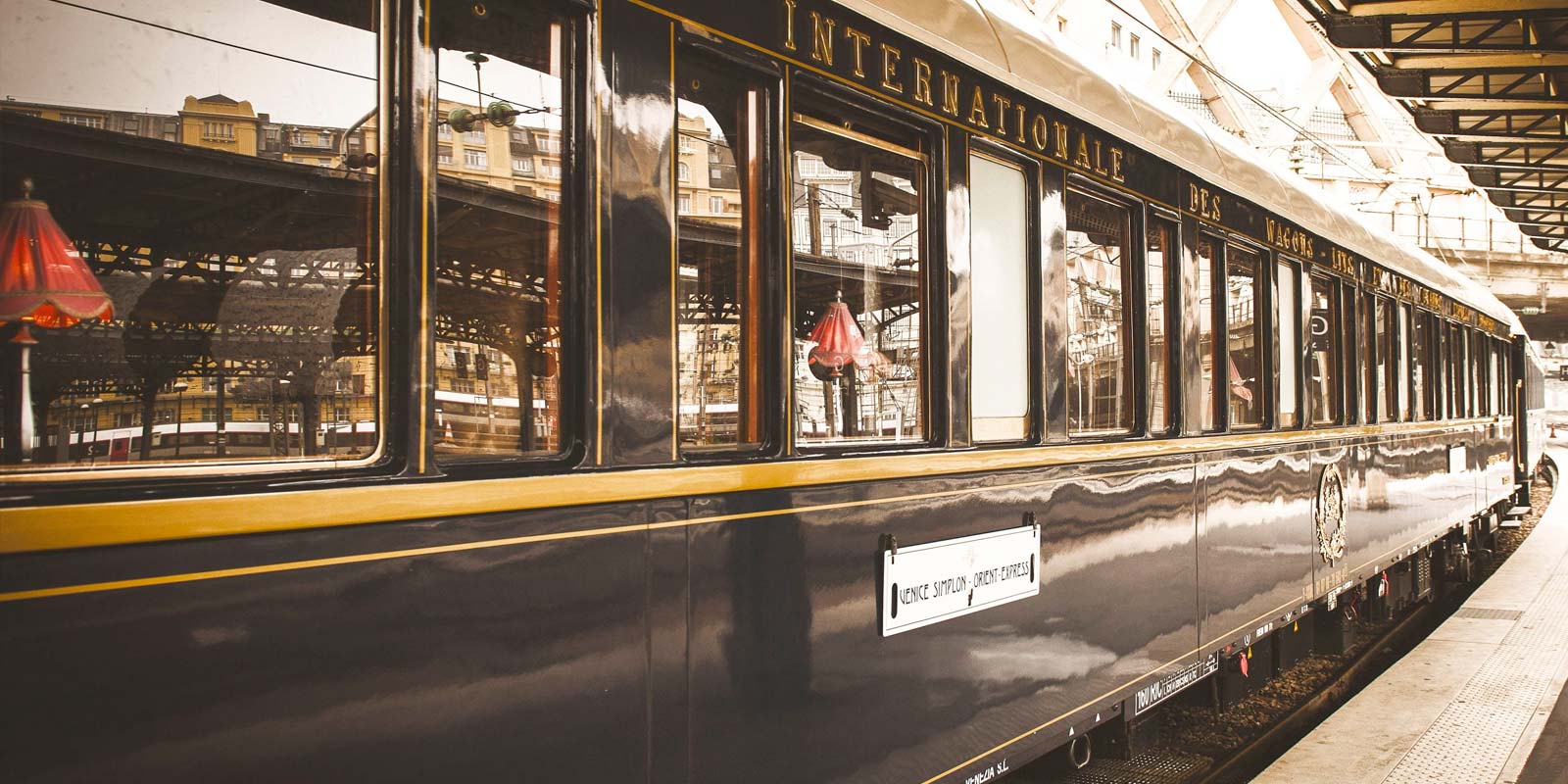 The Orient Express is the world’s most famous train and has starred in numerous books and movies. Naturally, and quite understandably, many people wish to experience this once-in-a-lifetime journey. Here at LuxuryTrainTickets.com, our experts are frequently asked Orient Express questions from how much it costs to where the train actually goes.

The first thing you should know is, there technically isn’t an Orient Express any more. The original service ceased in 1977 and its replacement stopped operating in 2009. That said, there are many other trains that offer the same authentic 1920’s style carriages and similar journeys meaning you are still able to experience what the original Orient Express must have been like during the Golden Age of Travel.

This may be disappointing news but it shouldn’t be; there are a wealth of luxury trains available that share the same Orient Express style all over the world. In the UK we are lucky to have the Northern Belle, the British Pullman as well as the Royal Scotsman in Scotland. There’s also the Grand Hibernian in Ireland making the UK one of the best luxury train hotspots in the world.

Head further west to Peru for the Andean Explorer and the Hiram Bingham that evoke adventure or go towards South East Asia for the Eastern and Oriental Express.

With that all out of the way, let’s take a look at the top 5 most asked Orient Express questions.
‍

Where can you go on the Orient Express?

Take a look at the European Orient Express route with maps

The ultimate and most authentic Orient Express style journeys take you across Europe from London to Paris, Vienna and beyond, far more destinations than the original that mainly went from Paris, France to Constantinople, Istanbul.

Northern Belle
Throughout the UK including:

British Pullman
Throughout the UK including:

Royal Scotsman
Throughout Scotland including:

Grand Hibernian
Throughout Ireland including:

Venice-Simplon Orient Express
Throughout Europe including:

Andean Explorer
Throughout Peru including:

Hiram Bingham
Throughout Peru including:

Where does the Orient Express begin and end?

With so many Orient Express style trains all over the world offering so many different journeys, the beginning and end points vary for each individual tour.

These days, luxury train journeys can vary from a one-day round trip to around seven nights. That said with trains being the epitome of opulence and elegance and passengers being treated to their own private accommodation with en-suite, seven nights aboard may not seem long enough.

Not all Orient Express style journeys are round trips and may require you to make your own arrangements back after you have reached your destination.

How long does the Orient Express take?

Depending on your journey, a tour aboard a luxury train can take between one and seven days. Day trips aboard the Northern Belle and British Pullman transverse across the UK before returning back to their original destination and offer a one-day luxury experience.

For something longer, the Royal Scotsman and the Grand Hibernian offer journeys that may take between three and seven days. These are sleeper trains and passengers enjoy their own luxurious private accommodation complete with en-suite and 24-hour steward service.

Journeys aboard the Venice Simplon-Orient-Express and the Eastern & Oriental Express also typically take anywhere between three and seven days, depending on how many locations are visited and the overall end destination.
‍

How much does it cost to go on the Orient Express?

Journeys aboard the Royal Scotsman are typically closer to £5,000 per passenger, but anything is possible and some journeys do cost significantly more (or less) than the standard offerings, typically due to the destinations or what is included.

It’s important to note that everything is included with the price; travel, accommodation, all food and drink plus entry to exclusive locations for private tours such as stately homes and gardens.

Book a carriage or an entire train
For those looking to book a journey for a group booking or corporate event, it is possible to book an entire carriage to yourself. This means you and your party are the only ones within a carriage and still benefit from the full 24-hour Steward service, perfect for a special occasion or event.

The ultimate in luxury train travel is booking the entire train and having all carriages to yourself. This is possible and some clients have chosen to do so for much larger group bookings or to embark on their own bespoke luxury tour. Anything is possible when it comes to luxury trains and our complimentary concierge service are available to organise this for you.

What to wear on the Orient Express?

A journey aboard a luxury train is one of style and opulence, so you can never be overdressed. Expectations vary for each journey, but for those attending a dinner on board or embarking on a journey over a few days should follow this loose dress code so as not to feel out of place.

As a guide, for dinner gentlemen should wear a suit and tie while ladies should dress in smart attire, however it is not uncommon for guests to go full black-tie and evening dress for the occasion. It is, after all, a once-in-a-lifetime experience.

During the day, when you are relaxing on board or off on an adventure at one of your locations, the dress code is smart-casual. As a general rule, the expected dress code aboard a luxury train are not too dissimilar of that within a luxury hotel. 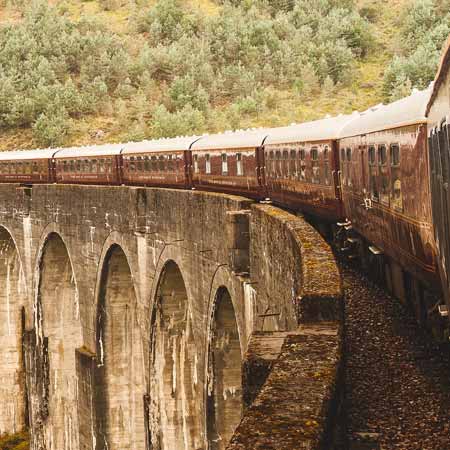 How Much Does It Cost To Go On The Orient Express?

We get asked this a lot at LuxuryTrainTickets.com, so we've broken down exactly how much a journey costs. 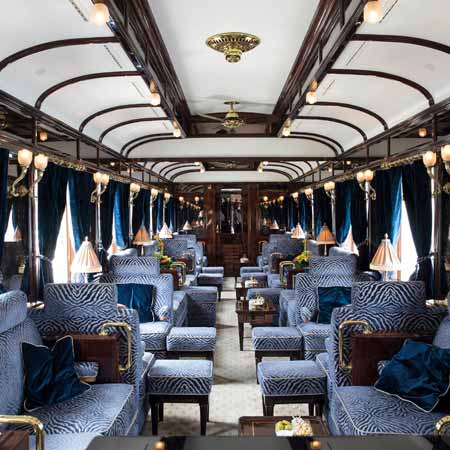 The most famous train in the world, we take a look at the best alternatives, the best journeys & prices for the ultimate experience. 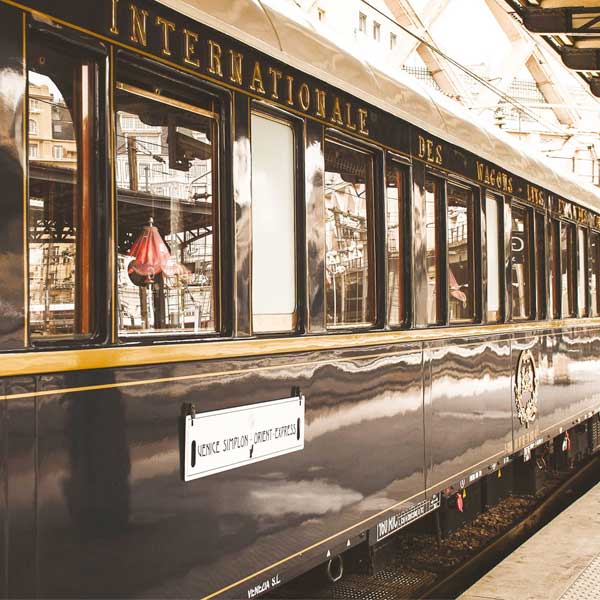 We answer the most-asked Orient Express questions about journeys, price and much, much more. 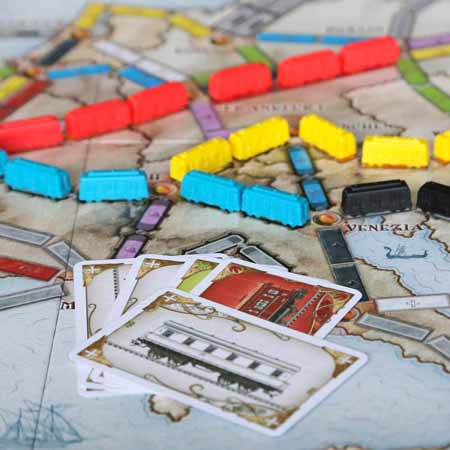 Useful links
Download a Brochure
Coronavirus Update
Cancellation Policy
Groups & Charters
Partner With Us
Contact
Sale
Privacy
Terms
Cookies
FAQs
Exclusive updates & offers emailed to you first
Let’s stay in touch. Receive the latest news & offers before anyone else.
Thank you! Your submission has been received!
Oops! Something went wrong while submitting the form.
By signing up to our eNews Letter, you consent to be contacted via email by LuxuryTrainTickets.com with offers and updates. To opt out, use the unsubscribe link at the bottom of the email.
LuxuryTrainTickets.com is an authorised ticketing agent and a trading name of Golden Moments International Ltd. Copyright © LuxuryTrainTickets.com 2021. All copyright and other intellectual property rights in all logos, designs, text, images and other materials on this website are owned by their respective owner. Imagery used for visual representation purposes only with no copyright infringement intended. ‘Northern Belle’, 'Belmond', 'British Pullman', 'Royal Scotsman', 'Grand Hibernian', 'Andean Explorer' and 'Hiram Bingham' are registered trade marks. All rights reserved. Registered Address: 119 Winter Road, Southsea, Hampshire PO4 8DS. Orient Express is a registered trade mark owned by Societe Nationale Des Chemins De Fer Francais SNCF.
Built by Big Rocket